The goal of this post is to succinctly explain the main concepts used in the sample size computation method that powerly is based on. In doing so, I aim to help get you acquainted with terminology used throughout the rest of the posts in the tutorial section. You may regard this post as a summary of the key things discussed in Constantin et al. (2021)open in new window.

To start the search for the optimal sample size, powerly requires three inputs, namely, a true model, a performance measure, and a statistic.

The true model represents the set of hypothesized parameter values (i.e., the effect size) used to generate data during the first step of the method. These true parameter values are collected in a model matrix denoted Θ. One may either manually specify Θ or generate it according to some hyperparameters via the generate_model function. The meaning and function of Θ changes depending on context in which it is used. For example, in the context of psychological networks, Θ encodes the edge weights matrix, where the θij​ entries may represent partial correlation coefficients. However, in the Structural Equation Modeling (SEM), for example, Θ may encode the model implied covariance matrix.

The statistic is conceptualized as a definition for power that captures how the target value δ for the performance measure should be reached. It takes the form of a function g(ξ), where the argument ξ is vector of performance measures of size R indexed by r(r=1,...,R), with each element representing a replicated performance measure computed for a particular sample size.

Most commonly, this statistic may be defined in terms of the probability of observing a target value δ for the performance measure (i.e., analogous to a power computation) as:

where the notation [⋅] represents the Iverson brackets (Knuth, 1992open in new window), with [ξr​≥δ] defined to be 1 if the statement ξr​≥δ is true and 0 otherwise. Therefore, the optimal sample size needs to satisfy g(ξ)≥τ, where τ is an arbitrary threshold indicating a certain probability of interest, i.e., the target value for the statistic.

Taken together, the true model matrix Θ, the performance measure f(Θ,Θ) with its corresponding target value δ, and the statistic g(ξ) with its target value τ allow one to formulate the following question:

Given the hypothesized parameters in Θ, what sample size does one need to observe f(Θ,Θ)≥δ with probability τ as defined by g(ξ)?

Coming in powerly version 2.0.0 we are introducing an API that allows researchers to build upon and easily extend the current method to new models and performance measures. Check out the Developer Section for updates on the API design and examples on how to extend powerly.

Given the inputs presented above, the search for the optimal sample size is conducted in three steps, i.e., a Monte Carlo (MC) simulation step for computing the performance measure and statistic at various sample sizes, a curve-fitting step for interpolating the statistic, and a bootstrapping step to quantify the uncertainty around the fitted curve.

The goal of the first step is to get a rough understanding of how the performance measure f(Θ,Θ) changes as a function of sample size.

To achieve this we perform several MC simulations for different sample sizes selected from a candidate sample size range denoted Ns​, for example, Ns​=[400..1400]. More specifically, we select T indexed by t(t=1,…,T) equidistant samples as S={s1​,…,sT​}⊆Ns​. Then, for each st​∈S, we perform R MC replications as follows: 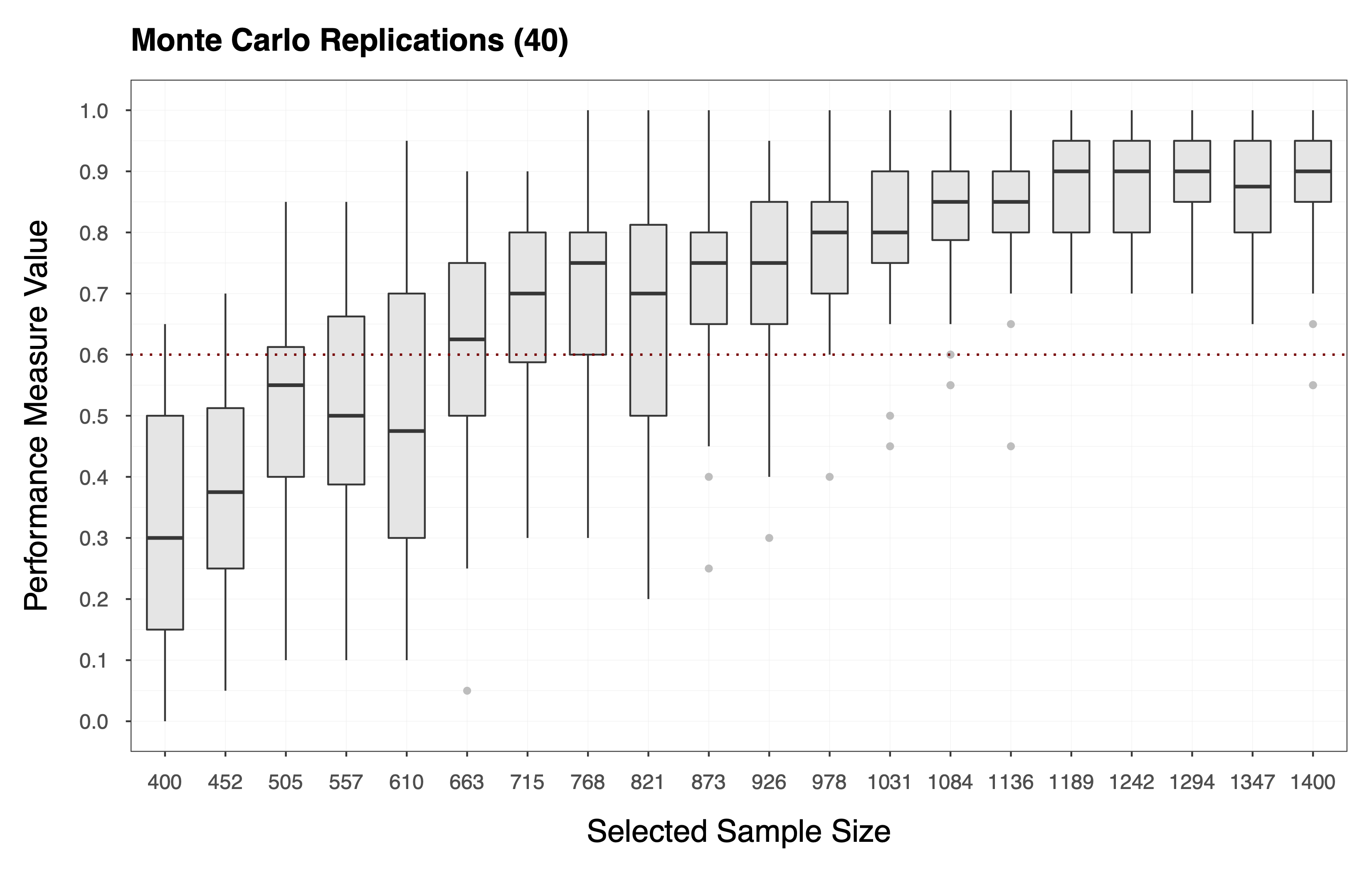 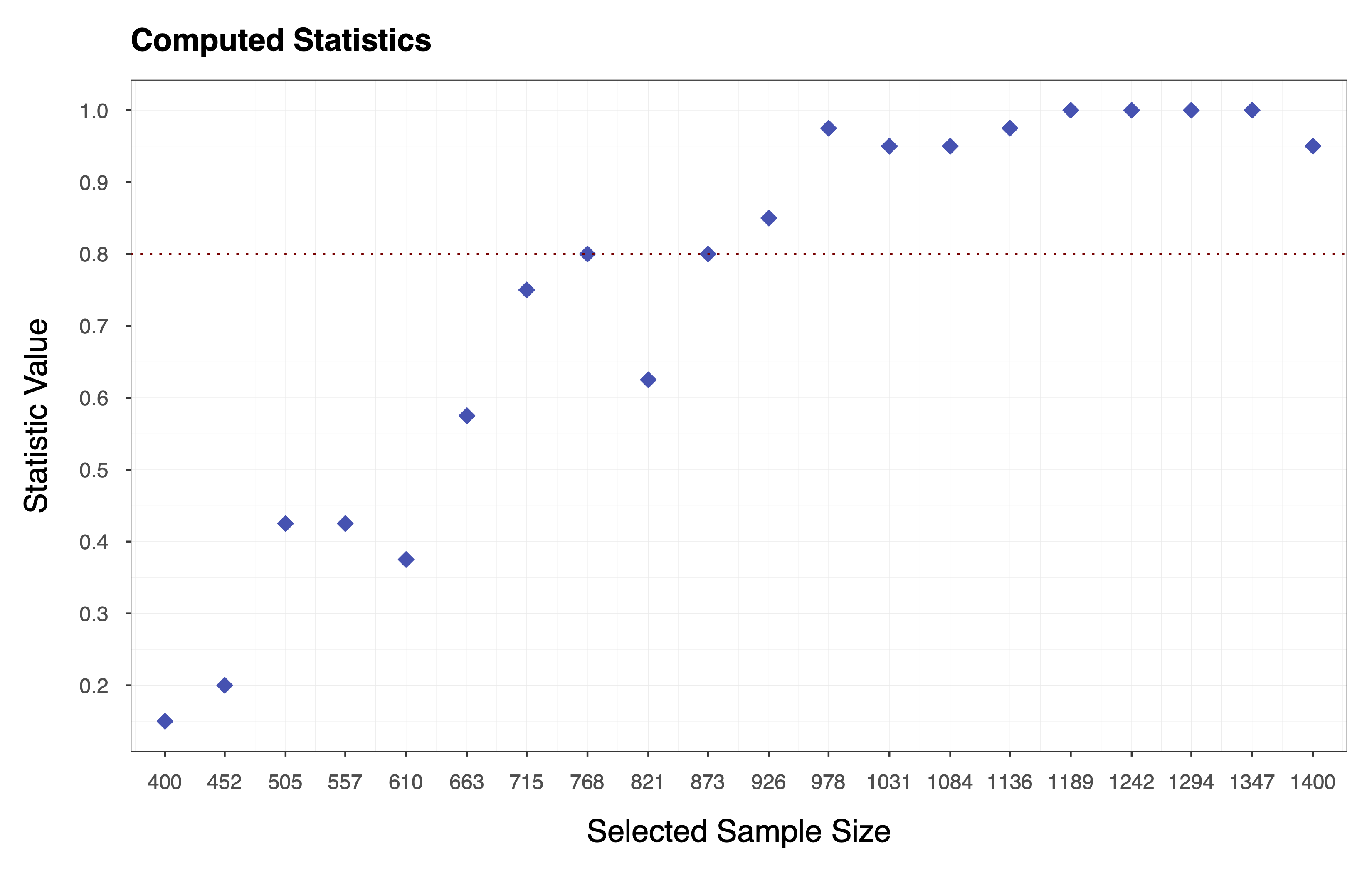 The goal of the second step is to obtain a smooth power function and interpolate the statistic across all sample sizes in the candidate range Ns​.

To achieve this, we fit a spline to the statistic values g obtain in the previous step and use the resulting spline coefficients to interpolate across the entire range Ns​. Depending on the choice of performance measure and statistic, it may be appropriate to impose monotonicity constraints when fitting the spline. For the example above, we assume a monotone non-decreasing trend and use cubic I-Splines (de Leeuw, 2017open in new window; Ramsay, 1988open in new window) via the R package splines2open in new window (Wang & Yan, 2021open in new window) with the number of inner knots selected based on a cross-validation procedure (e.g., leave-one-out). This assumption implies that the statistic increases as a function of sample size, as depicted in the plot below. 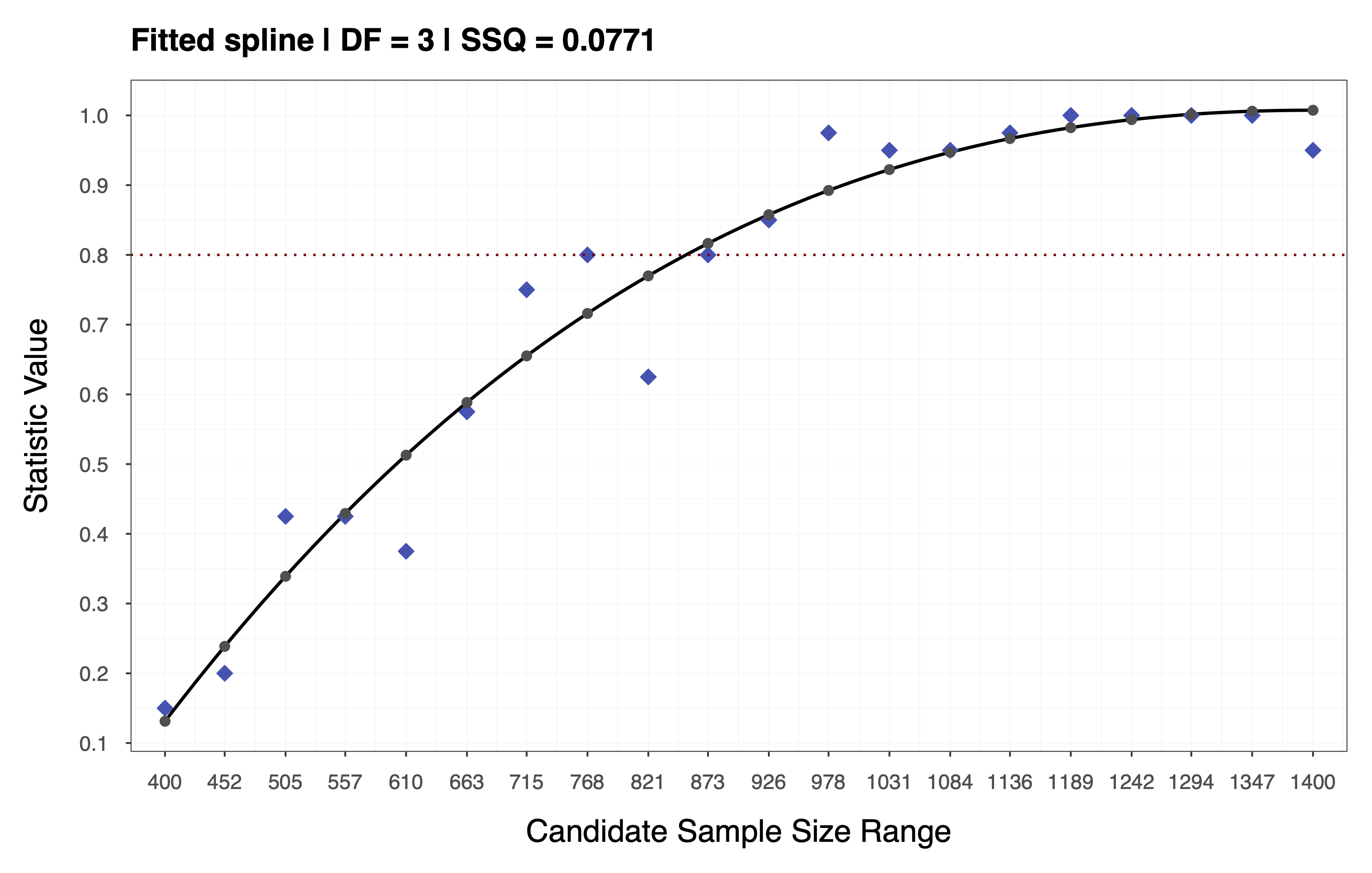 The goal of the third step is to quantify the Monte Carlo error around the estimated spline.

To achieve this, we use nonparametric bootstrapping to capture the variability in the replicated performance measures associated with each sample size st​∈S. More specifically, we perform B bootstraps runs, with the index b(b=1,…,B) indicating the current bootstrap run, as follows:

Performing the procedure above gives us a bootstrap distribution of statistic values for each sample size in the candidate range Ns​. In addition, we obtain this information using relatively few computational resources since we resample the performance measures directly and thus bypass the model estimation and data generation steps. Therefore, using this information we can compute Confidence Intervals (CI) around the observed spline we fit in Step 2. The plot below shows the observed spline (i.e, the thick dark line) and the resulting CI (i.e., the gray and blue bands) for the example above. Furthermore, the distribution depicted below shows the bootstrapped statics associated with a sample size (i.e., 854 in this case).

At this point, we can decide whether subsequent method iterations are needed by zooming in on intersection of the CI and the target value τ for the statistic (i.e., see the plot below). 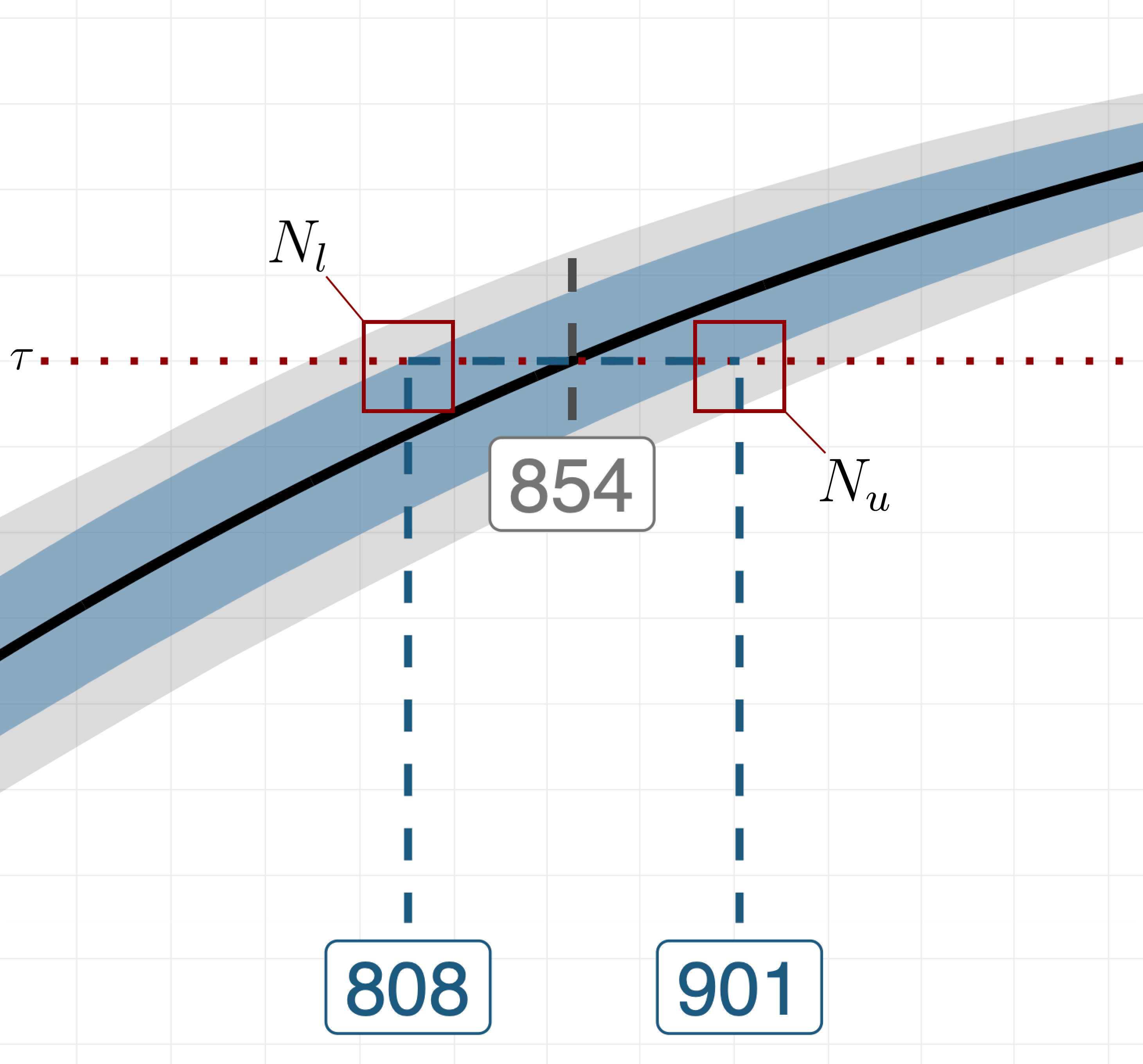 More specifically, we let Nl​ and Nu​ be the first sample sizes for which the upper and lower bounds of the 95% CI reach the target value τ. Deciding whether subsequent method iterations are needed boils down to computing the distance between Nl​ and Nu​ and comparing it to a scalar ε that indicates the tolerance for the uncertainty around the recommended sample size. If Nu​−Nl​≥ε, the initial candidate range Ns​ is updated by setting its lower and upper bounds to Nl​ and Nu​, respectively. Then, we repeat the tree steps of method discussed above, this time concentrating the new set of MC replications on the updated and narrowed-down range of sample sizes, i.e., Ns​=[Nl​..Nu​]. The algorithm continues to iterate until either Nu​−Nl​≥ε, or a certain number of iterations has been elapsed.

As discussed in the introduction of the Tutorial Section, the main function powerly implements the sample size calculation method described above. When using the powerly function to run a sample size analysis, several arguments can be provided as input. For example, the function signature for consists of the following arguments:

Please note that the function signature of powerly will change (i.e., be simplified) with the release of the version 2.0.0.

These arguments can be grouped in three categories:

The table below provides an overview of the mapping between the notation used in Constantin et al. (2021) and the R function arguments. The order of the rows in the table is indicative of the order in which the arguments appear in the method steps.

For more information about the data types and default values for the arguments listed above, consult the Reference Section for the powerly function, or the documentation in R by via ?powerly.

Aside for the method steps discussed earlier, we can also perform a validation check to determine whether the sample size recommendation consistently recovers the desired value δ for the performance measure according to the statistic of interest. To achieve this, we repeat the MC procedure described in Step 1, with only one selected sample size, namely, the recommendation provided by the method. This results in a vector of replicated performance measures for which compute the statistic of interest. In order to trust the sample size recommendation, the value of the statistic obtained during the validation procedure should be close to the target value specified by the researcher.

Check out the Reference Section for the validate function for more details on how validate a sample size recommendation.